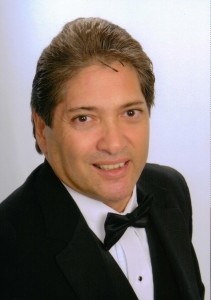 Born and raised in New York, Joey has been an entertainer at a very young age. By the time he was a freshman in high school, Joey has been in a number of bands performing in front of crowds. Upon graduating from College, he was still performing every weekend and holidays in dance party bands. Later in 1986 – 2005, Joey performed in a number of wedding bands and formed a DJ company with a friend carrying many crates of vinyl records for countless weddings and private parties and clubs. After moving to St Augustine FL in 2005, Joey continued his DJ business and opened Special Day Entertainment which he is now managing and doing full time. In 2007 Joey also opened Jacksonville’s first music rehearsal studio. Joey says, “Not many people get to do a job that they love, also I get to meet so many wonderful people at every event.

Alex’s love for music and people have followed him as early as his high school Deejay days. His New York-Latin roots have allowed him to be exposed to a wide variety of music and has become very versatile with all styles to set the right mood for any occasion. He is passionate about creating lasting memories and believes in engaging with the crowd to get them going or simply to make them feel they are all a part of the family. Alex has played in most venues located in NE Florida and surrounding areas and will share over 15 years of experience to your special event. He loves mixing music every chance he gets and produces his own music on his free time. He is a family man and believes in bringing people together though music.

Andy's passion for music started as a child. It all began as a teenager listening to the music played by DJs at local clubs. Seeing the energy of the crowd was the motivation that inspired Andy to become a DJ. The years of experience he brings to Special Day Entertainment is what makes him a strong asset to our team. Since 1990, his vast knowledge of music and understanding of different cultures helps DJ Andy bring excitement and diversity to your event.

Chelsea has been singing since she was a young child and she has been performing live on stage for many years. Chelsea is the perfect addition to any of our packages offered and will complement your wedding to the next level! She can sing songs  for any dance as well as some songs during  your ceremony, dinner or cocktail hour. From country to rock and hip hop, her versatility is amazing! Chelsea is a great asset to your Special Day!

Jan is the owner of Jan Spisar Photography, Videography and Photo booth now part of Special Day Entertainment staff! Jan Spisar photo booth is an established 5 star rated company that has been serving north & central Florida for many years. With a professional open air photo booth setup designed to compliment your event adding another level of entertainment for your guest. Guest will enjoy the spontaneity of posing for pictures with the addition of fun hats and props. Plus you keep a copy of every picture taken!